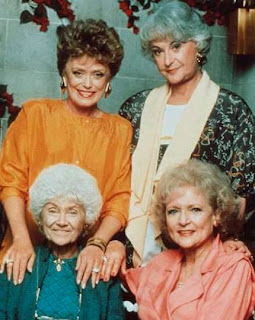 I have been watching TV while sewing lately, including reruns of the 1980's sitcom, Golden Girls. I have always thought of the characters as being older women. I was watching an episode that gave Rose's age..........55! I'm nearly the same age as that character. What is even worse, I am dressing like Rose! Am I really out of date or is this a classic style for a romantic woman in her 50's? I just don't know.

I have always had a problem of not dressing to match my personality. When the Golden Girls was first on the air I worked for an insurance company that dealt with brokers who rarely came into the office. After literally years of correspondence with these brokers, they asked us to send a photo of the staff at our office. They then guessed who we were. At that point I dressed in the 1980's power suit and had my hair cut short. The brokers guessed that I was my secretary who had long curly hair and had a very bohemian style.

I have always had a problem deciding how to dress modestly, but with my own style, which is very romantic. I have had even more problems with this as I have gotten older. I decided to look at the styles shown on Golden Girls, as each of these women had their own style. I am a cross between Rose and Blanche. My clothes have multiple personality disorder.
Posted by Mid-Life Meandering at 4:14 PM